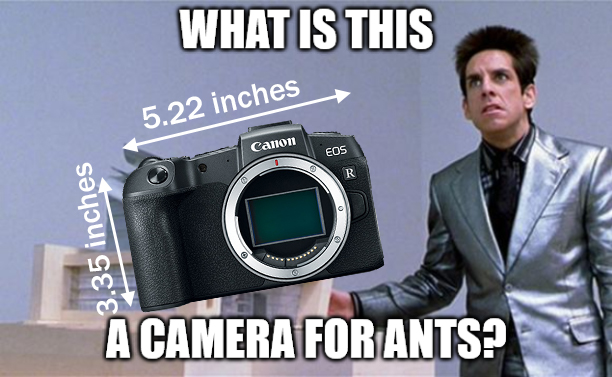 So 2019 has come and gone and with whispers of a professional version on the horizon, it looks like Canon is waking up from its mirrorless slumber and is finally stepping outside of its DSLR comfort zone. Their M6 and M50 were almost tentative forays into the APS-C mirrorless world, and even their full frame EOS R/RP left Canon shooters wondering if it was intentionally-kneecapped to protect Canon’s C-series of cameras.

Here’s a wishlist for features that I, a content creator in 2020, would like to see in the next Canon EOS mirrorless camera for professionals:

This is a no-brainer. Every flagship mirrorless from every other camera manufacturer has IBIS, from Sony’s Steadyshot to Panny’s sensor-shift technology. My colleagues and I would joke that the 1-DX Mark 2 “kind of” had stabilization on account of how heavy that brick of a DSLR is.

Unlike Sony, Canon incorporated a flip-out LCD screen and they deserve recognition for that. But the problem with the ES R is that the LCD panel goes dark when it operates at higher temperatures. And if you’re outside shooting in direct sunlight your LCD panel will go dark to reduce power draw so as to prevent overheating, which is really unhelpful because that’s when you need the added brightness most. And speaking of overheating…

One trend in mirrorless cameras are their smaller form factor. Which can be nice… sometimes. And I get it- camera manufacturers want to take advantage of the space-saving possibilities having gotten rid of the reflex mirror. But there is a such thing as too small, and as cameras have become smaller they are difficult to hold, and less able to vent out heat. A smaller body also less room for exterior buttons and knobs, which means annoyingly-complex in-screen menus. Meanwhile a larger body means not only more analog features, but also less cramped hands, a better dissipation of heat resulting in less overheating issues. As a previous owner of the Sony A6500 I was surprised to see how similar it was in size to its full-frame counterpart, the A7R. And those cameras are tiny.

While the EOS R/RP has a bit more heft to it than my baby-sized A6500, it’s still quite small in the hand. So please, Canon. Less smol, more t h i c c.

Professionals need to protect their work. Plain and simple. And clients expect us to protect our recorded footage and photos- and it’s a reasonable expectation.  No camera can call itself a “professional” tool until it has two storage mediums available, whether set to relay or redundant writing.

“But pros have been working for decades with a single card slot!” is something I’ve been told. That don’t fly, in my opinion. Those previous professionals tolerated this only because they had no choice.  Can you imagine how a client would feel if we opted for a single-SD card device, lost the footage due to a corrupted SD card, then found out that we could have rented a dual SD-card solution and prevented this crisis?

Or at the very least: lesser cropped. I’d settle for 1.25K crop. However, 1.8K crop is all sorts of insane.  People drop money on full-frame cameras so they can avoid the lens crop (M43 shooters get at me).  But an 1.8K crop seems like 4K was added to the EOS R as an afterthought.

Canon can, and should, do better. All of these wishes are not only doable, but many are incorporated into their competitors offerings on current models.  Canon- it’s time to stop protecting the C-series cameras and give creators what they’ve been clamoring for.  Watching you protecting the C-ceries is like watching a math prodigy child drop out of high school because he doesn’t want to overshadow his siblings. Weird metaphor. But you get the idea.