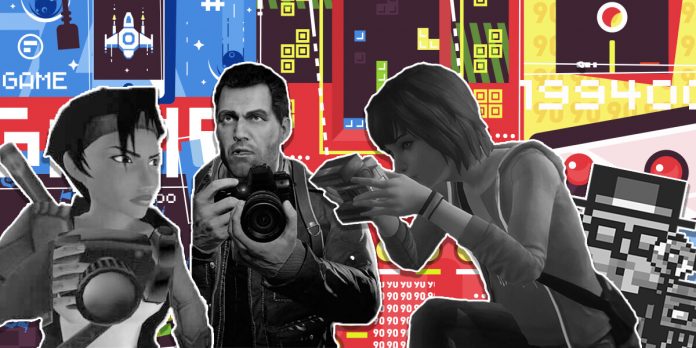 Can Photographers be heroes?

Photography has regularly served as a plot device in various forms of media. From damning photos caught by private investigators in film noir movies to photojournalists whose lives were turned upside by radioactive spider bites. And videogames are no stranger to incorporating Photographers in their storylines. And I’m not talking about half-baked “Photo Modes” that nearly every new release adds as an afterthought. Here are 5 games that prominently star Photographers in their storylines:

1. Jade, Beyond Good and Evil

This game was ahead of its time for so many ways. Jade, an investigative reporter, uses her camera to uncover a seedy plot targeting the people of Hillys. Even though Jade does has pack a combat staff, Beyond Good and Evil sets out to prove that the camera is mightier than the sword (or the combat staff) and makes the camera a critical inventory item throughout the game. This game is long overdue for a remake, and while Ubisoft has announced (and delayed) a sequel, this IP’s future is still a bit touch-and-go. Also- I wonder how many units Jade could trade that camera in for.

Creatives professionals be like, “What kind of tripod do I need” while Frank West be like, “What kind of barbed wire baseball bat do I need to bring to the zombie-infested shopping mall?” The Dead Rising Series was one of the first games to incorporate in-game photography and as a gamer who has played the series since the first installment I remember how big of a deal this was to the game’s fans. Dead Rising did it before it was cool.

In Life is Strange you play as Max, a young Photography student who unwittingly develops the power to travel back in time. Don’t be fooled by the Disney-flavored setpiece for this game of a coming of age type story taking place in a high school. It’s a dark, heavy game that wastes no time in reminding you of that during the first episode. I won’t spoil it for you, but the first episode is currently free on Steam for you to try. Max’s Photography hobby plays a very central role in this game. There’s even a “Camera Eye” Achievement that you can earn if you take 10 optional photos set throughout the game. You’ve got to give it to Max for going analog with a Polaroid-style camera while everyone else is in her grade is in the smartphone digital age. You go, hipster girl!

Photo-Man isn’t the protagonist for this incredible RPG (that’s reserved for Ness). But Photo-Man deserves mention here and I’ll tell you why: He has that indomitable can-do spirit and an outstanding commitment to follow your crew to the ends of the Earth to capture photos of your biggest milestones. Earthbound was the first JRPG that gave you a visual and nostalgic reminder of the struggle, heartbreak, and happiest times what your party had gone through from this game’s start-to-finish. It was a special little touch that added so much life to the end game’s credits.